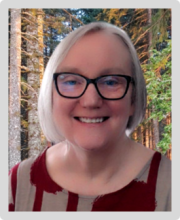 Anne Gillies has directed Oregon State University’s Search Advocate program since its inception in 2008.  With over 35 years of higher education experience, Anne has worked with equity, inclusion, and diversity in faculty recruitment and selection at Oregon State since 1996.  Anne grew up in the Midwest and first migrated west with a new degree in English Literature in the early 1980s.  Her interest in hiring and employment began when she arrived in Yosemite National Park to work as a hotel maid, and was promoted on the spot to phone reservation clerk because of her degree.  “They always told me that my liberal arts degree would prepare me to do anything, but until then I hadn’t realized exactly what that might mean" she says wryly.  With a life-long commitment to equity, diversity, and inclusion, Anne has worked in Affirmative Action & Equal Opportunity, Human Resources, Equity and Inclusion, and Equal Opportunity and Access before she (and the Search Advocate program) moved to Academic Affairs in July of 2016, and to University Human Resources in 2020.